How much of the world’s water is fresh?

If Earth was the size of a basketball, all of its water would fit into a ping pong ball. How much water is that? It’s roughly 326 million cubic miles (1.332 billion cubic kilometers), according to a recent study from the U.S. Geological Survey (USGS). Some 72% of Earth is covered in water, but 97% of that is salty ocean water and not suitable for drinking.


“There’s not a lot of water on Earth at all,” said David Gallo, an oceanographer at the Woods Hole Oceanographic Institution (WHOI) in Massachusetts.


Oceans create a water layer spanning 15,000 miles (24,000 kilometers) across the planet at an average depth of more than 2 miles (3.2 km). If you poured all of the world’s water on the United States and could contain it, you’d create a lake 90 miles (145 km) deep. This seems, and looks, like a lot of water, but looks can be deceiving. 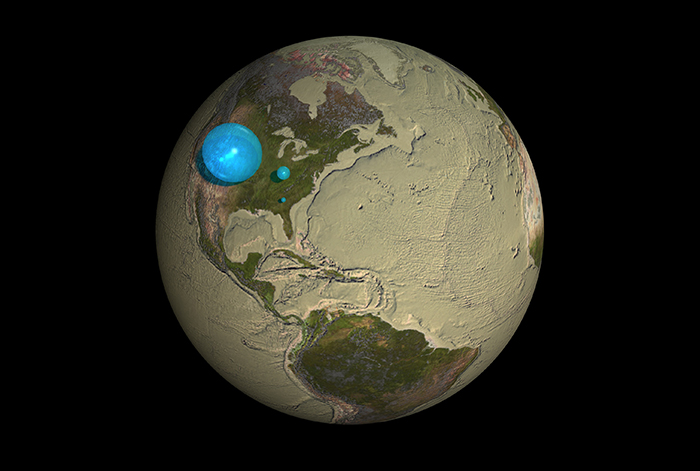 
If you could pull all the water in the ocean, the atmosphere, groundwater and surface water into a ball, in would measure only about 950 miles (1,500 km) in diameter (the large blue sphere). Only about 3% of the world’s water is fresh (the mid-sized sphere); and of that, only one-third is easily accessible to humans (the small sphere).


“For humanity to thrive, or even exist, we need to sprinkle that teeny bit of fresh water in the right places, at the right times and in just the right amounts,” Gallo said. Here’s how Earth’s fresh water is spread around the globe:

Six countries (Brazil, Russia, Canada, Indonesia, China and Colombia) have 50% of the world’s freshwater reserves. One-third of the world’s population lives in “water-stressed” countries, defined as a country’s ratio of water consumption to water availability. Countries labeled as moderate to high stress consume 20% more water than their available supply.


There is much more fresh water stored in the ground than there is in liquid form on the surface, according to the USGS.


To find a cheap and effective process of clean drinking water production is an important task in order to solve the problem of fresh water scarcity.

For Information: Write a mail